Dota 2 is amongst the most prestigious titles in the esports industry. Valve has worked continually in the development of its Multiplayer Online Battle Arena (MOBA) title, and its success is exhibited by its millions of followers. Aside from the passion for expansion of the game over the years, Valve has also laid solid foundations for the game’s competitive circuit. Since 2011, the developer has organized the Dota 2 world championship i-e The International [1]. This year, the competition is all set to take place in Singapore. And in this article, we will cover all the details you need to know before the Main Event of the competition kicks off in late October.

Singapore will host the 2022 edition of The International in October [2]. The competition will showcase the 30 best teams from the Dota Pro Circuit (DPC) competing for the multi-million-dollar prize pool. Here is everything that you need to know before the kick-off of the main event 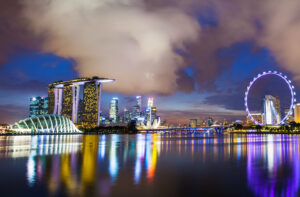 For TI 11, the organizer, Valve decided to remodel the format and make the competition more entertaining for the community. Over the years, the previous editions only took place for 10 days, but now it will last for 23 days. TI 11 will kick off on the 8th of October and end on the 30th. The competition will follow a four-stage format: The Regional Qualifiers, Last Chance Qualifiers, Group Stage, and the Main Event [3].

These teams competed in a double-elimination format, in a best-of-three series. Meanwhile, the grand finals followed a best-of-five format and the winner directly qualified for the group stage main event [5]. While the second and third-placed teams will compete in the Last Chance Qualifiers. Here is a list of the winners and the runners-up from each competitive region of Dota 2:

1st Place: Hokori (Qualifies for Group Stage of The International 11)

2nd Place: Infamous (Qualifies for the Group Stage of the Last Chance Qualifiers)

3rd Place: Tempest (Qualifies for the Group Stage of the Last Chance Qualifiers)

1st Place: Soniqs (Qualifies for Group Stage of The International 11)

2nd Place: Nouns (Qualifies for the Group Stage of the Last Chance Qualifiers)

3rd Place: T1(Qualifies for the Group Stage of the Last Chance Qualifiers)

2nd Place: Outsiders (Qualifies for the Group Stage of the Last Chance Qualifiers)

1st Place: Royal Never Give Up (Qualifies for Group Stage of The International 11)

The TI11 Last Chance Qualifiers will take place from the 8th of October to the 12th. The 12 teams from regional qualifiers will compete for supremacy, and only the top two teams will qualify for the Main Event. The qualifiers will start with the teams split into two groups of six teams competing in a Round-robin BO2 format [6]. The bottom two teams from each group proceed to the Lower Bracket playoffs. Meanwhile, the top four from each group will compete for supremacy in the Upper Bracket Playoffs. The playoffs will be played in a Double Elimination format and, without a grand finale. Where the winner of the Lower Bracket and Upper Bracket finals will compete in Singapore.

The 20 teams will compete in the TI 11 Group stage, where they will be placed in two groups of ten teams. The bottom two teams from each group will be eliminated from the competition. Meanwhile, the top eight will fight for the championship in the Main Event. The matches of the Group Stage will follow a single round-robin format [7].

The 16 survivors of the Group Stage will compete for the ultimate title of the TI 11 championship in the Main Event. Valve has introduced a twist for the Main Event. Since it will take place in two phases, The Preliminary Playoffs and The Final Playoffs, and each will have its venue.

The Preliminary phase will take place at the Suntec Singapore Convention & Exhibition Centre, from 20th to 23rd October [8]. Meanwhile, the Final Playoff phase will be held at the Singapore Indoor Stadium from 29th to the 30th of October.

The prize pool of the 2022 TI 11 follows the format of the previous editions of the competition. The organizer follows a crowdfunding model which Valve has adopted since TI 3. It starts with a base prize of US$ 1.6 million. Then, crowdfunding takes place with the sales of the in-game TI Battle Pass.

At the time of this writing, the prize pool of the TI 11 Singapore is $12.9 million [10]. Yet, we highly recommend you keep an eye on it in the days to come since the community will aim to break the $40 million record in the coming days.

A total of 30 teams will compete for supremacy in Singapore. Some rosters received a direct invite to the event after a solid performance in the Dota Pro Circuit. Meanwhile, others will have to survive the regional qualifiers.

The top 12 teams of the DPC standings got the direct invite and will start the competition directly from the Group Stage [11]. The teams achieved this feat after gaining points in the Majors, Regional Finals, and Leagues. Meanwhile, it will be tough for the rest of the 18 teams since the only path is to reign supreme in the qualifiers.

After discussing the entire format and the team competing in TI 11, it is only fair that we discuss the favorites to lift the title. The International 22 will be the biggest event in the Dota2 calendar year. The strongest teams will compete for a chance to be crowned the world champion. As we saw in the previous editions of the tournaments, anyone can lift the title. Yet, we still present our picks with a high probability of winning the title.

PSG.LGD reigned supreme in the Riyadh Master 22 and also reached the grand finale of the PGL Arlington Major [12]. Yet they had to settle for the second spot after a narrow defeat to Team Spirit. It is fair to say that PSG.LGD can beat any team on its day. The team will be aiming to take revenge for the TI 10 defeat as they only got a 2nd place finish.

The second mention on our list includes one of the youngest teams competing in The International since the majority of the members of the team are under 18 years of age. However, they are not pushovers, as they have won two Majors this season.

OG lifted its first trophy of the season in Sweden after winning the ESL One Stockholm Major. After that, the team did experience a dip in form but returned to its winning ways by adding the ESL One Malaysia trophy to its cabinet [13]. And since this was the last Major before the TI 11, it is no surprise that the team will be arriving in the tournament with high confidence.

If you are an active member of the Dota 2 community, you might be surprised to see Entity making it to our list. Your concerns might be right. Since they didn’t even manage to secure a direct invite to the TI. This might be true, as the team lacks experience in playing at the highest level. Yet we are confident that Pure and co. has what it takes to lift the trophy [14].

In 2021 no one would have thought that Team Spirit would reign supreme, but the CIS side silenced the critics. And looking back, how many times we have witnessed a team from nowhere getting the world championship title, it is fair to say that anything can happen.

Tobi and the boys will have to play the best Dota 2 of their lives for a chance to win the trophy. They beat some of the best teams in the world before and would have to do it again in Singapore.

No, it’s not wrong to predict that a Dota 2 team can be crowned the world champion twice in a row. Since OG’s triumph, the only team to follow in their footsteps is Spirit. There were expectations that the reigning world champions would dominate the current DPC. Yet they only won the PGL Arlington Major 2022 after beating PSG.LGD. The team also finished in 2nd place at the Riyadh Masters.

Although Yatoro and the rest weren’t as dominating as expected, the team did pretty well in almost all events. After failing to win the Riyadh Masters 2022, Team Spirit defeated PSG.LGD to win the PGL Arlington Major [15]. Nonetheless, the team will come out all guns blazing in Singapore.

Royal Never Give Up

The last team to feature on our list is another Chinese team, Royal Never Give Up. Since they claimed the #1 spot in China’s DPC and proved that they will be a force to reckon with in TI 11 [16].

What makes RNG stand out from the rest is the fact that they hold some of the most experienced Chinese veterans of the game. The competitive circuit of Dota 2 is traditionally dominated by ambitious and young players, yet experience should never be underestimated and that makes RNG one of the teams to keep an eye out for in Singapore.