Our founders Boris Obodda and Stefan Kaemper were there, accompanied by the great Marina Cherkashina, Lead Project Manager at Requestum and our Head of IT.

Two days packed with talks, keynotes and panels that are highly relevant to us, all on the subject of blockchain. 🚀⭐

The Summit website says: “The CV Summit enables individuals to convene, learn, share and demonstrate how blockchain is a key driver of the Fourth Industrial Revolution”.

The 4th Industrial Revolution, or Industry 4.0 … roughly speaking, an #organisational design concept, which, however, for the field in which we are moving, still says almost too little about the revolutionary #technologies and #organisational principles that we are facing today. 🗺️

All in all, this is a field that sounds like a foreign language to many people, where a wide variety of dialects are also spoken. 👽

Especially the technical field, or more precisely #IT, because that is definitely a language all its own.

So it was all the more fantastic that Marina was there, because where our two founders have a perfect command of the language of #finance, Marina is an “IT native” and to such an excellent level that she can translate almost any other “language” – be it a financial, a creative or a visionary one – into #code, #pixels and #matrices. 🖥️ 🌟

The photos clearly show the #teamspirit that unites the three of them – and we can proudly say that this spirit is something that connects our entire team. ✨

Oh, there was of course another area at the Summit that was highly exciting and relevant for us: #Token. Tokenized finance, security tokens and tokenized commodities, for example. The developments in this area alone are incredibly revolutionary. Google it once and be amazed at how broad the term token is. 😲

Of course, we are talking about tokens in the financial and IT sectors.

Fun fact: A token is also the name given to an early historical calculating stone.

Didn’t we mention before that trade is as old as mankind? 🤝

So, tokens are also an absolutely logical consequence in the #financial sector, and an efficient one at that.

By the way, did you know that the shares of Cow Level AG are tokenized shares? There is no better, simpler and safer way to become a shareholder than via tokenized shares. 🤩 📈

But that’s a topic for another time. We just wanted to mention it before. 😎 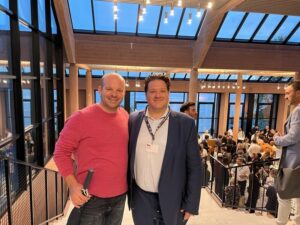